Oh friends, it's finally here! I thought the month between Christmas break and midwinter break wouldn't be too slow and awful. I told myself I wouldn't take any days off, and I succeeded in that. There was a pretty rough stretch for a bit, though, with that bunch of teachers leaving.

Loud Leo left our class a few weeks ago. A new boy came to the class, but has apparently left again. Buster, whom I have not yet mentioned, has remained a serious detriment to the class's focus and my patience (or lack thereof). Buster refuses to control himself most of the time. It's 'just' his mouth, but that means that when the rest of the class is quiet, he makes noise and distracts them and then never shuts up. And then other boys follow his lead and make more noise. GAH. He's really started to haunt me.

As for the rest of the kids, some are still okay and some are still difficult. Fidgety Frank continues to play with anything he finds (actual toys, paper, eraser bits, etc) and do almost no work. BFG falls asleep half the afternoons. Upbeat Girl still tells me I'm beautiful.

We had a party on Friday, that I'm not totally certain they deserved, but lord knows it had to be better than trying to force them to learn on the Friday afternoon before a week off. Our last lesson of the day was writing Valentine acrostics. About half of kids basically did nothing, but the rest did a poem, and a few of them turned out pretty well actually.

Anyway....we're here! Vacation! A whole week off! My favorite part is always the not waking up before dawn. Also the not being at school for so many hours. I didn't bring anything home with me, but I will go in for a few hours next week to work on unit planning. I've been behind for so long but too exhausted to do anything about it. I hope to remedy that, at least a little for now. 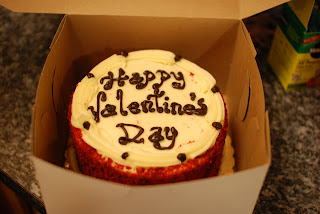 Also, happy Valentine's Day today! The boy and I had a wonderful day together, out and about.
Posted by Jules at 6:11 PM 6 comments:
Email ThisBlogThis!Share to TwitterShare to FacebookShare to Pinterest
Labels: teaching

I keep thinking of tidbits to post on here, but they're none of them very happy at all. This job has me focused on the fatigue, neverending admin tasks, and the endless planning in which I'm drowning. I'm not a very happy person at this job, and this makes for either an unhappy and repetitive blog, or an empty one.

But I remembered that I have been collecting Goofball anecdotes. He's been a bit more annoying and talkative lately, but he still is so cute (in a nicely immature way [as opposed to an annoyingly immature way]) and he catches me off guard with unexpected sweetness.

We have a schoolwide token-type system. I've assigned two students to hand them out, because I already have like four systems I can't remember. One morning during morning meeting, he handed one to me. He said, "here, for you, for teaching."

We were walking down the stairs and he asked me, "Do you run the tracks?"
Me: "No, I don't. Why, do you think I need to? Are you saying I'm fat???"
"No, you're skinny, that's why I thought you did."
Then another kid piped in that goofball said I walked too fast for my age.
I asked what that meant and a third goes, "He means you're really old and creaky."
Then I grabbed ears all around.

Have I mentioned the BFG? I have a Big (mostly) Friendly Giant in my class. This week, after learning in another class about the lunar new year, he came up to me and asked what year I was born. I said something about not telling him that. He wanted to know what animal year I am. "Chicken?" he said. "Dog?" with a smirk. I narrowed my eyes and told him he was being inappropriate.

A few minutes later, he and another couple students were chatting. One of them called over to me, "Did they have cheerleading in your school?" I said yes. "Were you a cheerleader?"
BFG goes, smirking again, "She couldn't make it." "Hey!" I snapped.

Then another one goes, "Are you married?" I was actually about to answer this for once, when BFG pipes up, "That's too personal! You can't ask her that!"

I goggled at him. "You ask me that question like once a week!"

I was doing some kind of lesson about something or other. Who knows, really. A kid randomly called out, asking how old I am. I said, "Old enough."
Student 1: 29!
Student 2: 34!
Student 1: She's not that old!
Posted by Jules at 3:48 PM 2 comments:
Email ThisBlogThis!Share to TwitterShare to FacebookShare to Pinterest
Labels: cute, haha, teaching


Actually more like zzzzzzz, as I'm pretty sure most of us will be sleeping in and loving every second. :)
Posted by Jules at 5:22 PM 1 comment:
Email ThisBlogThis!Share to TwitterShare to FacebookShare to Pinterest

We have lost five staff members in the last two months.

But I certainly don't blame them and mostly, I'm jealous of them that they got to leave. Hmm.
Posted by Jules at 11:30 AM 5 comments:
Email ThisBlogThis!Share to TwitterShare to FacebookShare to Pinterest