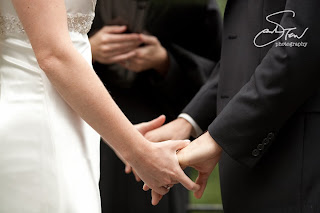 He is my husband.

He is so handsome!
He loves me, and sees the best in me.
He gives the best hugs.
He is strong, physically and emotionally.
When he gets frazzled, he lets me talk and calm him down.
When I get frazzled (which happens much more frequently), he gives me a hug and listens to me and tries to make me feel better.
He smells really good.
He likes to travel and is a great travel companion.
He's a great roommate--he always does his dishes and puts his clothes away.
He's forgiving when I'm not so quick with my own tidying.
He is health-conscious.
He makes up goofy songs about mundane things and sings them to me.
He works really hard, and always puts his all into everything he does.
He supports me emotionally.
He occasionally supports me financially.
He has never ever questioned or even blinked at my quirks.
Our hands fit perfectly together.
He's always up for adventure.
He is happy to have an at-home lounge day.
He is amazing at Rock Band.
He says silly things to make me laugh.
He is ever so patient with my photo things--happy to pose for me, willing to wait if I stop to take pictures.
He is passionate about sports.
He knows everything about government, American and British.
He is a smart cookie in general.
He makes me feel beautiful and special.

He is my husband of one year, and I am so happy for it. I can't wait for more years together.

Posted by Jules at 7:04 AM 1 comment:
Email ThisBlogThis!Share to TwitterShare to FacebookShare to Pinterest
Labels: homelife, wedding

I know some people that are social butterflies, who have a million friends, who have weekend plans a month in advance, who get together even during the week!

I have never been one of those people. I'm more of a social larva. While I was teaching, doing anything during the week just never made sense; I was too busy and tired. But also, I've never really had a lot of friends. I can be really outgoing, I can be a leader...but it's much easier to be strong, loud and in charge when the people around you are pre-teens. I found that after being a leader all day long in my job, I wanted to hang back and let another grown-up take a crack at it, so I could relax a bit. And so around strangers, I am often quiet and shy. Usually I have plenty to say, I just don't always feel up to saying it.

I always want to have friends, and make friends. That's really hard to do as an adult. Or at all, really. It's all about propinquity--who's around you. The friends I still have from college, we all lived in the same dorm. Then I befriended some teachers at my school (who have since moved away, gotten married, and had babies). Happily, a couple teacher-blog friends became real-life friends, and that expanded into flickr friends who became real-life friends.

But just meeting people? Finding friends on one's own? I don't know how to do that.

So I try to be open to possibilities that other people put together. For instance, in the winter, there was an AmeriCorps Alums event at a bar. I ended up finding some other NCCC folks and we happily chatted for a couple hours. We've gone to a party or two, and ended up talking to fun people that I wish could become friends. Have you done that--met a person at a social event but then took the initiative to establish contact? Like, I want to say, "You seem like a neat person. Be my friend." I am occasionally great at being a one-hour party friend, but I've never been able to make that stick into a real thing.

And then sometimes I just can't do any of it. There was another AmeriCorps Alums event this summer, in a different bar. I was really excited for it, since the previous one had been so successful. I walked up to the bar, and it was completely jammed with people. I tried to steel myself, and walked in. I kind of looked around like I was supposed to be there, was meeting someone there, was not just a loner loser trying to find people to latch onto...

And turned around and walked out. I couldn't do it. I was exhausted and shy just thinking about the effort to find the right group of people and trying to be all perky. So, defeated, I went home and watched tv.

Earlier this week, I read about a book club meet-up on Forever Young Adult, a blog that talks about all things YA (books, tv, movies). The assigned book was one I'd already read and loved, Beauty Queens. There was a meeting in my borough, not very far away. I put it on my calendar and hoped I might have the resolve to go.

It was scheduled for last night. I was so tired yesterday that I left work a little early and actually took a nap. I waffled on whether I had the energy--mental or physical--to go out and meet strangers. But with my resolve to get out there and try to meet potential friends, I figured I had to at least try. I knew that I'd have some things in common with people, at least! I can talk about books for days.

So I went. I almost didn't find the people, and almost right away was struck with that lost, stomach-butterfly feeling of being a loser. But! someone else noticed me holding a book and looking around. Together we found the others (helpfully with a sign). There were only four of us total, which meant that we had plenty of time to talk about all kinds of things book-related. I got some great recommendations and gave some as well.

I felt energized while there and afterward--proud of myself for getting out there, happy to find people with similar tastes and mindsets, excited to talk about books I love or hate.

I'm hoping that this book club will continue and that I can juggle that as well as my other YA book club. Dare I say it, I'm also hoping that I can make some more friends. I really should be butterflying out there, finding new and interesting people to visit with.

Now though, it's late and I want to curl up with a book. Good night, friends.

Posted by Jules at 8:18 PM 3 comments:
Email ThisBlogThis!Share to TwitterShare to FacebookShare to Pinterest
Labels: homelife, me me me

Ms M is back in NYC for the summer! She stayed with us for a bit, and brought back a big bag of freshly-picked blueberries after a weekend trip. She suggested we make a cobbler with them. I was nervous; I've been too scared of baking pie and pie-related things. However, cobbler is super easy, and the recipe we found was delicious.

You just throw the berries in with some sugar, cornstarch and lemon juice, and dump it into a pie plate. 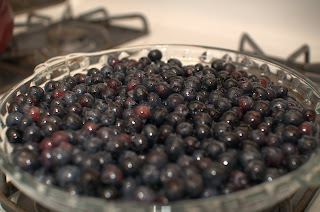 Then you mix the topping dough by hand (no mixer or fancy tools needed) and drop it on top of the berries, and put the whole thing into the oven! 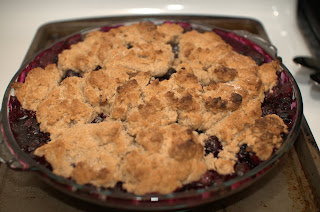 Oh my goodness, it was so, so good. Especially warm with vanilla ice cream. I highly recommend this recipe--the topping has cinnamon in it! The other recipes I perused didn't and I'm sure they couldn't have been as yummy.

Last week I couldn't stop thinking about the delicious cobbler and also that strawberry cobbler sounded really good. So over the weekend, we made one! 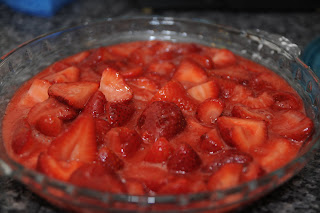 The strawberries needed a bit of pre-cooking, in a pot with the sugar and cornstarch, and some water. It made for a gooey paste of sweet deliciousness, which then was covered with that delicious topping! 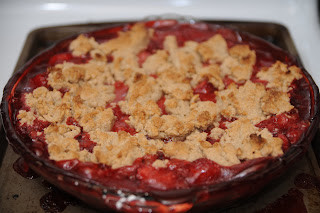 Oh my goodness, it was amazing. YUM.