Where did the time go?!

I keep remembering that it's JULY now, for crying out loud, and just feeling like that's insane. I guess since I don't have school as a frame of time or day reference, everything is just blurring together.

Speaking of school, since I wrote that long rambling post about teaching dreams, I haven't had any. Maybe I just needed to get it all out of my head in some other medium?

I baked a cake this weekend, and made buttercream frosting.

I'm currently reading my 65th book of the year.

It is really hot outside. I am so, so grateful to have a working air-conditioner.

This week I'm starting a new part-time gig as a baby photographer. Not so much for the pay, but for the experience. Today I did a training thing and I start for real on Friday.
Posted by Jules at 2:31 PM 2 comments:
Email ThisBlogThis!Share to TwitterShare to FacebookShare to Pinterest
Labels: homelife, lists, random

I've mentioned that one of my 2011 goals is to try one new recipe a month. (I missed one in April, which can be forgiven because I was out of the country for half of it.) Extra bonus because I can bring the results to the office, where they are convinced I'm a great baker. Ha!

Anyway, this week there was a barbecue at the office, for my supervisor who is moving away (but staying with the company). We had the barbecue on our patio (yet another great thing about this company), and it was originally a potluck. So I figured it would be a perfect time to try out something new and hopefully tasty.

When we were at Costco last, I got some dried cherries. Later on, I thought about adding them to chocolate chip cookies, but a colleague suggested oatmeal cherry cookies instead! Doesn't that sound delicious?

I'm sure it would be...unfortunately that was not meant to be, as the husband has eaten almost all of the cherries. :) (The grocery store across the street has all the dried cranberries in the world, and not a single dried cherry. Harrumph.) So I just went with oatmeal-chocolate chip cookies, as always from Slow Like Honey. 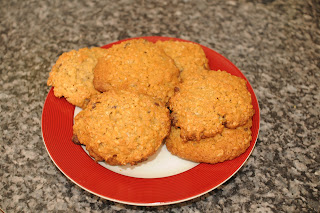 They turned out okay. I see why dried fruit is so much better with an oatmeal recipe. Oats are dry! I didn't even put in the full 3 cups of oats (more like 2 1/2) and they are very oaty. Could have used even more chocolate chips to balance the dry. I still would like to try them again with dried cherries! Today I was out and bought some nutmeg, as I noticed that coming up in other ingredients, and is a pretty common spice for cookies and cakes.

Of course, I made some banana bread also. I only had two large ripe bananas instead of three medium, and I think I can taste a difference. It doesn't seem as dense and moist and banana-y. But still pretty good! 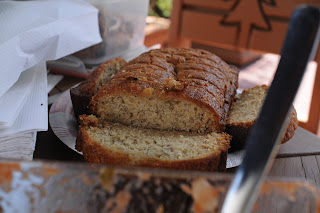 Posted by Jules at 7:16 AM No comments:
Email ThisBlogThis!Share to TwitterShare to FacebookShare to Pinterest
Labels: 2011goals, cooking, photos 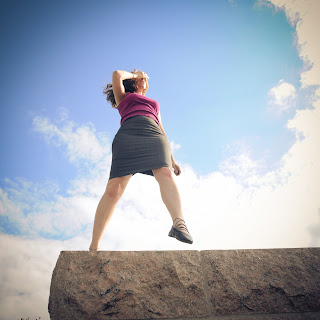 Last night I had a teaching dream. At first this might not be strange, but then you might remember that I haven't been a teacher in real life for an entire calendar year. It may or may not surprise you that despite the time away, teaching has never strayed very far.

In this dream, I had decided to start teaching again, and I was kind of happy about it. My students were the students I taught last year at Charter Elementary School, but they were two grades older. Later in the dream they morphed into my students at First Charter Middle School. And there was a specific cameo from a quiet girl whose name I couldn't remember. But she knew I was her former teacher and looked upset that I'd forgotten. I scoffed, well, sometimes I hardly remember my own name! She said her name was Sarah. [Later, after I'd woken up, I'd recognize her as one of my students at First Middle School, named Amanda.]

This was not the first teaching dream I've had in the past twelve months. A month or two ago, I dreamt that I was visiting a school (whose staff and students resembled First Charter Middle School, though the building didn't) and ended up interviewing with a male administrator. He seemed impressed with me, so did some female teachers I talked to, and I was happy as I walked out.

Over the months, I've had a number of other dreams where I was teaching, or pretending to teach, or supposed to be teaching.

On June 29 of last year, it was my first day of not ever being a teacher. I felt AMAZING. So happy, light, almost bodily relieved. I felt free.

On June 27 of this year, as I was trying to write a post like this, and looking through old photos of student field trips, I teared up for awhile. I'm not exactly sure why. I miss the kids? They were cute? We had some good times? It's so easy to forget the multitude of bad times. I've even forgotten most of the names of most of the kids.

I remember crying at the end of my second year, because I'd had such a better year than my nightmare first year, with some incredible kids that I was sad to leave. That was the only time I'd been that emotional about ending a student experience. (Oh, and those students graduated from high school this year.) The rest of the years I was exhausted and happy to have made it to summer.

There are so many amazing things about living a non-teacher life, but they're shallow things like sleeping in and not disciplining other people's children. Wait, I guess that's not so shallow? I don't know. Also the not grading papers or making lesson plans all the time. I still see things and have the "ooh, that would be a great classroom project!" thoughts.

There were two boys last year who continue to haunt me--one so much that I can't even say his name out loud. I can still hear his and his mother's voice in my head and occasionally relive the crazy conversations both awake and in dreams/nightmares. Partly because I wonder how I could have/should have dealt with things differently--what kind of difference would that have made? This was a child with serious issues, who made it the problem of everyone around him, and his family lied about the issues and other things, and enabled a lot of the situation. It ended up poisoning the experience of many of us in the class, especially the second student, who decided that he too could be rude, very disrespectful, and utterly, utterly defiant. Since the other one got away with it and everything. (Not because I didn't try every single thing I could, still with zero support.)

Remember that this doesn't include all the other behavior issues that I dealt with from many other students throughout the year. Jesus Christ, when I think about it, I can't believe I survived as well as I did.

It's pretty interesting that so many dreams involve First Charter School--an experience now almost three years in the past. Clearly I am not over it; I haven't forgiven myself for failing.

I took the photo above to symbolize taking a leap into the unknown, in respect to another aspect of my life. But I realized afterward that it fits perfectly into my teaching life. I jumped into that fairly blind; I never wanted to be a career teacher. Four years in, I took a huge, very blind leap into charter schools. And then, feeling like I was on a whole other kind of ledge, I gratefully stepped down. Without a plan, into the abyss of a completely new world.

Teaching is never far from my mind, especially because in this job I work with schools and teachers. Should I go back to teaching someday? Should I have never started teaching in the first place? I just don't know. Vague versions of this go through my mind all the time--and clearly it's weighing heavily on my subconscious.

I know this is all over the place, but so is my head.
Posted by Jules at 8:04 AM 7 comments:
Email ThisBlogThis!Share to TwitterShare to FacebookShare to Pinterest
Labels: me me me, teaching 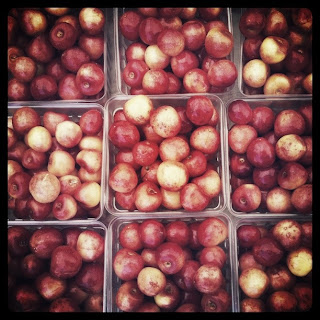 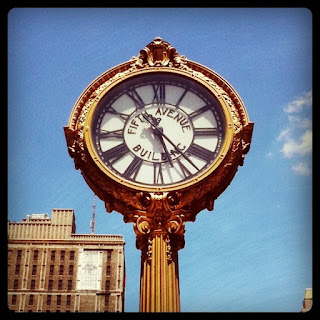 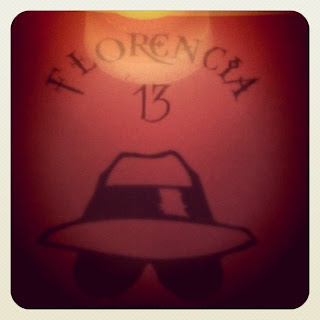 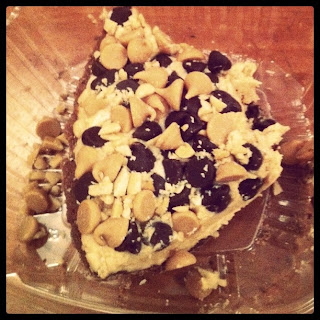 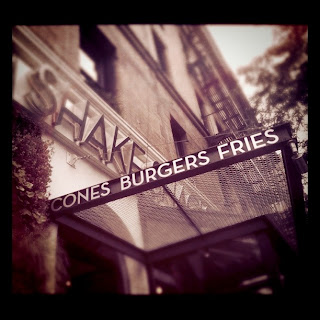 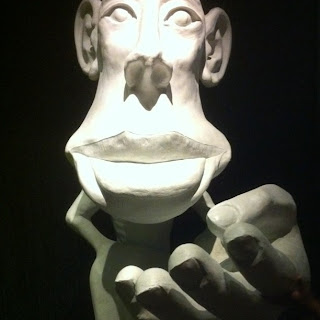 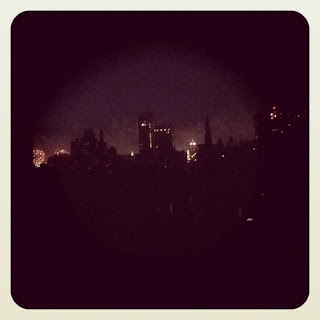 Posted by Jules at 11:23 AM No comments:
Email ThisBlogThis!Share to TwitterShare to FacebookShare to Pinterest
Labels: homelife, iphone, photos

Heh, you have to know that's sarcasm--has anyone used a line like that in sincerity, ever?

A study was recently done by Marist College, about some super-basic knowledge of American history. "Only 58% of residents know that the United States declared its independence in 1776. 26% are unsure, and 16% mentioned another date."

Even worse: "[F]or the second year, about one in four Americans doesn’t know from which country the United States declared its independence. While 76% correctly cite Great Britain, 19% are unsure, and 5% mention another country."

For both questions, people in the age group 18-29 had the highest percentage of incorrect answers.

No Child Left Behind started in 2001. Sure has done a good job, eh?
Posted by Jules at 9:01 AM No comments:
Email ThisBlogThis!Share to TwitterShare to FacebookShare to Pinterest
Labels: education
Newer Posts Older Posts Home
Subscribe to: Posts (Atom)