You may know that I've been taking a picture a day for...a long time now. I did three years of daily self-portraits, and in 2010 that overlapped with a daily photo, and I'm continuing that in 2011. As of today, that's 1521 days.

Thanks to those projects (which sometimes would be 100 photos to get just the right one), plus hundreds/thousands of photos from every trip I've taken, plus 1,000 picture photo shoots, I have tens of thousands of photos on my external terabyte harddrive. Some of my friends who also do daily photos started a project where we find a photo from our archives that we've never posted before.

When we were in Greece and got back, everything took a long time to catch up. Just this past weekend I got caught up on photos for that project.

I randomly found this shot from mid May 2007. I don't remember taking it or if there was something special about it. Probably not, but it's a neat snapshot of my life at the time. 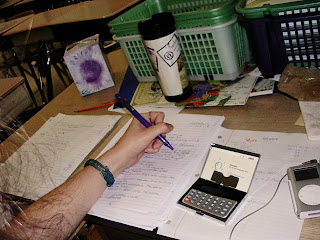 Note my AmeriCorps mug (which I made in 2003!), and the old-school iPod (a hand-me-down gift from the boy when I finished grad school the summer before--previously I'd still been using my discman, from 2002!).

Apparently this was the only calculator I had, being an English teacher and all. I still wore a watch back then (still cheap plastic like I'd loved having in AmeriCorps), and of course I still had frizzy hair!

I am surrounded by plastic bins, which were used for anything and everything. These were from the 99cent stores in my teaching neighborhood, so I happily stocked up on a ton of them. They stored books in the classroom library, collected homework from classes, held stacks of papers like this to be graded. Bins are the greatest, am I right?

Goodness gracious, is that an actual box of kleenex? In May?! That's a miracle. Must have been one that the kids brought and I hid in lockers to be brought out only when absolutely necessary. (Otherwise my students would have easily gone through a carton of kleenex in the first month. Teachers, you know what I'm talking about.)

Here I appear to be grading poetry quizzes. Can you name all the characteristics of a limerick? How good are you at determining rhyme scheme of a short poem?

This was back when our state ex@ms were in the middle of the year (STUPIDSTUPIDSTUPID), so I got to do poetry during poetry month, though it clearly bled over to May. (I could never finish anything on time as a teacher. Even in a double period, I was rushing to finish talking about the homework as the bell rang. My units always ran long. Better than the alternate though--the thought of finishing something early and having nothing to do was horrifying.) I imagine that with spring break in late April, followed closely by the b!g t3sts, there was not much poetry to be had in New York City classrooms.

This is such a weird time of year for a teacher. The weather gets nicer, and everyone starts getting antsy and restless. The end of the year seems like it should be close, but the end of June is a loooong way from now. I never started a countdown before the start of June, because it seemed too unbearably long. We had to plan for the endless span of hot days in June, desperate to keep the kids engaged and all of us from the crazy house. We always did our drama unit in June, as it was a good way to get the students interacting. Some years I had the kids write their own plays. This often didn't work. I found a handful of short plays and would assign them to groups to perform. We would talk about some basics and they would 'rehearse.' Usually there was one kid who would take over and tell everyone what to do. Often they all just kind of stood around.

I was thinking today about one thing I always did at the beginning of my drama unit. I'd start them with reading aloud together, to practice being 'loud' and clear in a safe, unembarrassing way, and to listen to each other. In there somewhere I would have a pair of (fairly confident and good reader) students get up in front of the class to do Who's on First. I would just hand it to them and say go. Then sit at the back of the room and try not to laugh too loudly. Since I taught three classes, it was always interesting to see the differences in which kids got it as they were reading, and which classes understood the humor. A couple times the readers just immediately got it and hammed it up perfectly, and some of the classes cracked up like I did.

I'm pretty sure that every single time I did this--three classes, four years, so 12 times--the kids would look back at me and stare at me laughing. It was one of the few times that I 'broke character' as the strict teacher, and I'm pretty sure it confused them. And/or gave them permission to laugh too.
Posted by Jules at 4:06 PM 2 comments:
Email ThisBlogThis!Share to TwitterShare to FacebookShare to Pinterest
Labels: daily drivel, me me me, memories, photos, teaching

Happy Memorial Day Weekend!! Are you excited for the extra day to relax/sleep in/have fun/travel/etc? Woo!

I've been reading a lot, currently on my 50th for the year! It's funny; I was reading nothing but YA for a few months. So in April I told myself I should read at least one 'grown-up' book per month. And then I read nothing *but* grown-up books for a solid month!

One that I loved was The Eyre Affair, a fun, alternate-reality filled with wordplay, and none of the fuss of dystopia or vampire shit. Thursday Next (what a freaking awesome name!) is featured in a bunch more books; I've requested them from my neighborhood library!

One that I didn't love was 1984. I read half of it years ago and found it fascinating. I bought it later and it's been on my shelf ever since. My book club decided to read that (and Brave New World, which I read in 2007 while in Amsterdam) this month, so I picked it up and read the whole thing. Blaaaaahhhh I was bored silly for the first half (and a little alarmed at the misogyny at the beginning!). Then things finally picked up. It got super boring for about fifteen straight pages and then a little more interesting at the end. Overall, I was kind of underwhelmed. Is that wrong? I don't know, I'm just kind of over that genre. Everyone and their mom is publishing dystopian fiction lately and UGH. Anyway, I wrote a haiku to summarize the book!

Here's a happy for you though: check out these fun bookshelves (via Neatorama)!

My favorite is this one:

Makes sense, seeing as how I seem to keep acquiring books (having friends in publishing is bad news for one's bookshelves!) and running out of room!

Sidebar: Recently I followed a link to a blog called Unclutterer, which has me inspired to start eyeing things that are extra and unneeded. Actually, just this afternoon I did another sweep of my shelves and cleared out almost two feet of books that will go on the street/to the laundry room bookswap shelf. So my imaginary twin bookshelf would be going in, not out. :)

Finally, (as seen again on Neatorama) Amazon published an "official" list of the most well-read cities in the US, based on their sales (totally objective!).
New York City is not on there at all! What do you think? Weird, considering all the universities and publishing companies here!

Anyway, hope you get some good reading in on this long weekend!
Posted by Jules at 3:58 PM No comments:
Email ThisBlogThis!Share to TwitterShare to FacebookShare to Pinterest
Labels: books, links, random
Newer Posts Older Posts Home
Subscribe to: Posts (Atom)