I do solemnly swear. 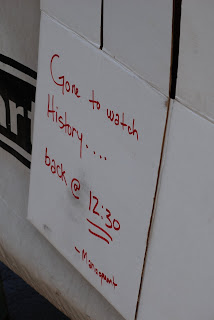 The city has been abuzz with Obamaness and Inauguration Fever. Bars and restaurants celebrated with extra specials over the weekend and several public spaces served as gathering areas to watch the events. I personally would have been too timid and cold to join strangers in a square somewhere, so I watched at home. On the DVR.


The crowds were unbelievable. I'm not jealous of the thousands and thousands of people jostling in and around the capital, but obviously it was worth it to see history live and in person.

Speaking of history, that's what I was teaching for the last four months. The first week back from break, we were examining the Constitution. I made sure to have the students locate the Presidential Oath--"These are the words that you will hear Barack Obama speak, words that were written over two hundred years ago." Though these kids were pretty obsessed with Mr Obama, they didn't seem too interested in the connection between past and present, the living document the Framers created that still directs everything the country does. Will they remember that class? Will they remember me? The information and questions that I tried to impress upon them? Did they learn anything at all? I know from experience that teachers who disappeared were instantly deleted from the school consciousness, never to be spoken of again.

It's a new start for the country. I choked up at the swearing in, and marveled over the fact that yes, we did it! President Obama (I can still hardly believe it!) is not a superhero and he cannot single-handedly fix the US. Even my kids, back in November, understood that the problems are too big and the pressure to rectify them all immediately is impractical. But we can all have hope and get to work together. The chance for something different, something new, that's what's inspiring us young people.

What an interesting time for me to be at a personal crossroads as well. I've scheduled several interviews this week, for various ventures, and I'm continuing the search for more opportunities. It's overwhelming at times--so many listings! So many things I might maybe be qualified for! So much competition in this ridiculous job market! Yesterday I found an absolutely perfect job for me, and I crafted a special cover letter trying to convey just that. It's frustrating that I have to keep looking, mostly for things that aren't meaningful for me. While I like making money, I'm much more concerned with finding something interesting and that makes me happier than I've been. And for some silly reason, I can't force a hiring manager to stop interviewing others and hire me on the spot!

For all of us, life goes on. Many things remain the same, with hints of exciting changes on the horizon.
Posted by Jules at 2:58 PM
Email ThisBlogThis!Share to TwitterShare to FacebookShare to Pinterest
Labels: culture, whee

Best of luck with the job search.
It sure was an amazing day not to be teaching so you could see this great occasion in the comfort of your (hopefully heated) living room.

So you were teaching history?
I wish you had shared that information when you were telling us you were having problems with the lesson planning? You know we would have helped.